The article “Etobicoke’s Historic Communities” was written by Denise Harris from the Etobicoke Historical Society. For more information about the history of Etobicoke and this great organization please visit www.EtobicokeHistorical.com. 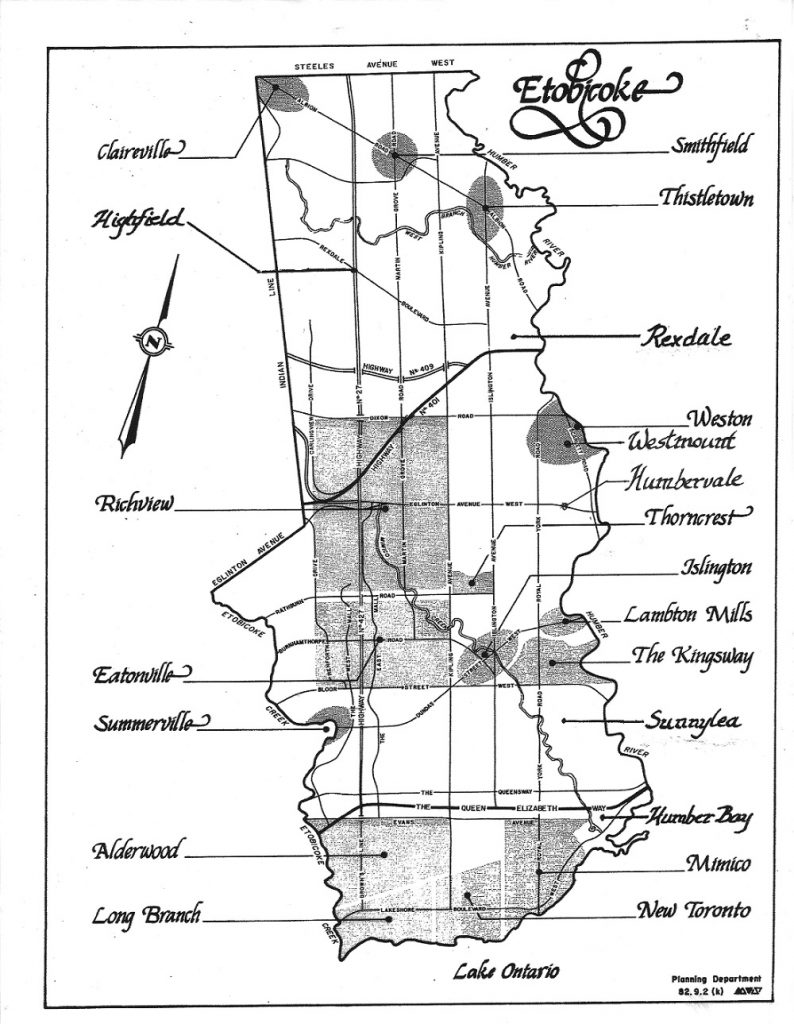 This community was originally part of the 4,150 acre Militia Lands. Its main north/south street, Brown’s Line, is named for Joseph Brown who settled in the area in 1831. Its main east/west street, Horner Avenue, is named for Daniel Horner who settled on an existing farm in 1878 and later served on Etobicoke’s township council.

Located in the very northwest corner of Etobicoke, this village was named by its founder, Jean du Petit Pont de la Haye, after the eldest of his six daughters, Claire. In addition to acting as a service centre for the surrounding farming community, it was also a stop on the Albion Plank Road and its 1851 toll house still stands at 2095 Codlin Crescent.

This community is named after Timothy Eaton of Eaton’s department store fame who, along with his descendants, bought 369 acres of land on both sides of Highway 427 between Bloor and Burnhamthorpe. From 1891 to 1944, they produced milk, beef, pork and vegetables for their downtown Toronto store. The name is remembered today in Eatonville Public Library and Eatonville Junior School.

This farming community was located at the west end of Rexdale Boulevard, high above the wide valley of the West Humber River. All that remains of Highfield today is the ca. 1840 pioneer cemetery of Sharon United Church on the north side of Rexdale, east of Humberwood Boulevard.

Located on Lake Ontario between the Humber River and Mimico Creek, this community has always had strong links to boat building and recreation. Over time, as transportation modes changed from horses to boats to railways to automobiles, the accommodation along the waterfront for vacationers shifted from resort hotels to camp grounds to rental cabins to motels – all of which are now gone. North of The Queensway, Humber Bay was a major centre for market gardening.

This community developed around the intersection of Scarlett Road and Richview Side Road (now Eglinton Avenue West), on land that had belonged to John Scarlett and his four sons (Edward, John, St. George and Samuel) who were millers and lumbermen. Edward’s 1865 house still stands at 1 Heritage Place.

Islington’s central location along Dundas Street and the decision to make it the township’s administrative centre ensured that this village has continued to thrive over the years. Originally called Mimico, the village was forced to pick a new name in 1859 when they needed a post office and the name Mimico was already in use (see “Mimico” below.) At a meeting held in Thomas Smith’s Inn to select a new name, the attendees were undecided and asked the innkeeper’s wife, Elizabeth, for assistance. She suggested “Islington”, her English birthplace. Islington is also home to Montgomery’s Inn, a Toronto museum built in 1830 and the second oldest building in Etobicoke today.

This village was a vital milling centre on the Humber River at Dundas Street, starting in 1806 when William Cooper built grist and saw mills on the east bank. In 1834, Thomas Fisher built a grist mill on the west bank, which became a woolen mill from 1880 until destroyed by a fire in 1901. Several heritage homes, including mill workers’ row houses, have survived between the river and Prince Edward Drive.

This village developed east of Etobicoke Creek as a summer recreation area for well-heeled Torontonians who started building cottages here in 1884. A treed, cottage-like environment developed that is still the norm. Long Branch became an independent village in 1930 and is likely named after the resort community of Long Branch, New Jersey.

This town developed primarily as a residential area west of Mimico Creek. More modest housing for railway workers was built north of Lake Shore Blvd., while more affluent people bought lots along the waterfront and built large summer homes. Many of these beautiful homes still stand today, although an equal number have been lost to development. Mimico was incorporated as an independent village in 1910 and as a town in 1917.

In 1890, this lake front community between Long Branch and Mimico was planned by a group of industrialists to be a manufacturing subdivision. Although it only covered one square mile, New Toronto once had the highest value of manufacturing per square mile in North America. It became an independent village in 1913 and a town in 1923.

The village of Richview started in Mississauga prior to 1852 and gradually shifted east until it centred around the intersection of Highway 427 and Eglinton Avenue West by 1887. All that remains of Richview today is the pioneer cemetery of Richview United Church, now in the middle of the busy Highway 401/427 interchange, providing drivers with a surprise glimpse of the past as they zoom past in their cars.

Centred around the intersection of Albion and Martin Grove Roads, this hamlet was named after Robert Smith and his three sons, Eli, Thomas and Levy, whose 200 acre farm straddled the intersection. The village’s one room “little red schoolhouse” acted as a model school where students teachers from the Toronto Normal School practiced teaching in a rural environment.

This community, bound by the Humber River, Berry Road, Mimico Creek and Bloor Street West, was an important area for market gardening in the late 19th and early 20th century. It received its name when seven year old Edna Whitworth won a contest in 1907 for suggesting the name “Sunnylea” for the area’s new school.

This hamlet straddled Etobicoke Creek along Dundas Street. It was originally called “Silverthorn’s Mill” after John Silverthorn and his son Aaron built saw and grist mills on the east side of Etobicoke Creek just north of Dundas. No trace of this village remains today.

In 1847, Scottish settler John Grubb filed a plan for a village named St. Andrews at the intersection of Albion Road and Islington Avenue. Unable to use that name when they needed a post office in 1851, residents chose the new name Thistletown to honour the village’s doctor, William Thistle. The oldest building in Etobicoke is a house at 23 Jason Road in Thistletown that was built pre-1820 and was once owned by John Grubb. The house is now owned by his great-great-great grandson.

ABOUT US
Parks, Restaurants, Events, Shopping, and much, much more! Discover everything Etobicoke has to offer!
FOLLOW US
© Copyright 2017
Loading Comments...